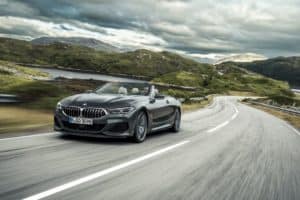 Are you ready for a new 8 series?  BMW recently introduced the first-ever 2019 BMW 8 Series Convertible, which joins the new BMW 8 Series Coupe in blending ultra-sporting driving dynamics with an emotional and elegant design. The soft-top, four-seat BMW M850i xDrive Convertible combines immense power and torque delivery from its updated 4.4L 8-cylinder turbocharged engine with tenacious grip and peerless poise from the advanced chassis, luxurious comfort and state-of-the-art innovations in technology, driver assistance and connectivity. The result, is a vehicle that delivers an impeccable four-season driving experience, with the charisma of a low-slung, aggressively styled open top sports convertible, inviting the warming rays of the sun and the wind flowing past the cockpit to be your constant driving companions.

BMW 8 Series Convertible is a very modern form of sporting appeal, beautifully designed, with an air of exclusiveness and sensual allure. Its unique character is the result of BMW’s new styling language focusing on modernity and emotional engagement. The car’s low-slung and elongated silhouette is enhanced when the fabric- top is lowered. When raised, the compact fabric roof pulls taught over the interior, reducing wind noise and creating a stepped look, accentuating the deck-like rear visual of the new BMW 8 Series Convertible. The standard specification for the new BMW M850i xDrive Convertible contains exclusive design features and options to enhance the driving experience. In addition to multifunction seats and the M leather steering wheel, there are M pedals, M driver’s footrest and special floor mats to imbue the cabin with a distinctly sporty flair. The illuminated door sills and the display in the instrument cluster bear the BMW M Performance Automobile model badge or the M logo respectively. 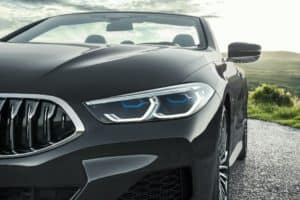 This luxury-sport convertible’s promise of performance is visualized in dramatic effect by the jutting design of the front of the vehicle, with large air intakes creating an imposing appearance on the BMW M850i xDrive Convertible. The BMW kidney grill showcases its increased proportions and features a hexagonal outline that widens towards the bottom and a single-piece surround that encompasses its various elements. The 8 Series Convertible features standard Icon Adaptive LED Headlights with LaserLight technology. Both light tubes are used to generate the daytime driving lights as well as the low and high beam, thereby creating the signature brand look at all times. The rear end is composed of sculptured, emotive surfaces that emphasize the car’s width and low center of gravity. The slender all-LED rear light clusters extend deep into the flanks and add to the effect. The taillights illuminate uniformly in a distinctive ‘L’ shape. Twin, trapezoidal exhaust tailpipes are positioned on both side of the rear lower section. 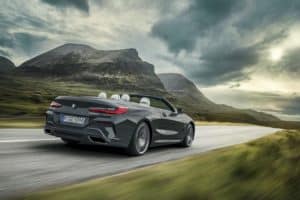 The 8 series offers a fully-electric soft-top design that incorporates multiple layers of fabric materials to insulate and helps reduce weight from the very top of the vehicle. The result is reduced outside noise and improved handling and performance experience.

When lowered, the fabric top is stowed under a sophisticated cover with a surface finish and stitching coordinated with those of the instrument panel and interior door and side panel trim. The subtle “double-bubble” contour of the cover behind the two rear seats mimics the design incorporated in the BMW 8 Series Convertible’s roofline. The roof can be raised or lowered in 15 seconds at speeds up to 30 mph with the touch of the top control button located on the center console.

A standard wind deflector can be positioned behind the front seats to further enhance the already serene passenger space. When not in use the wind deflector may be folded up and stored in the trunk. Optional neck warmers are available to extend the top down driving experience into cooler temperatures. Air outlets, integrated into front seat head restraints provide a pleasant warming effect. Air flow can be adjusted over three speed settings either manually, via the button on the center console or automatically, which adjusts air flow depending on vehicle speed.

The BMW 8 Series Convertible features a standard automatically activated rollover protection system. The system activates the moment that data analysed by the central safety electronics indicate a risk of a roll-over. Two high-strength aluminum rollover bars, fitted behind the rear headrests, are extended by a pyrotechnic charge in a fraction of a second to form a survival space for the vehicle occupants in conjunction with the extremely rigid a-pillar windshield surround. 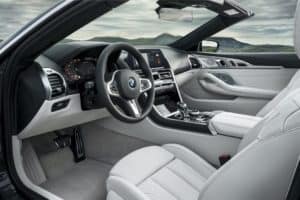 The interior has been designed to help the driver focus on the road ahead and enjoy the experience of driving. The car’s wide center console rises up towards the instrument panel at the front, separating the driver and front passenger areas. This center space encompasses the audio control unit and its function buttons, the air conditioning control panel and air vents as well as the freestanding and frameless Control Display, all arranged above each other in a clear, horizontally partitioned structure.

The clear arrangement of the controls helps the driver to focus on what’s happening ahead. Apart from the gear selector and the iDrive Controller, the center console also accommodates the Driving Experience Control switch and the engine start/stop button, all arranged within a newly designed function cluster with active haptic feedback. The control unit for the light functions is new and now consists of buttons positioned at the bottom of the instrument panel between the steering wheel and the driver’s door. A leather M Sport steering wheel with multifunction buttons and shift paddles for manual gear selection is standard. 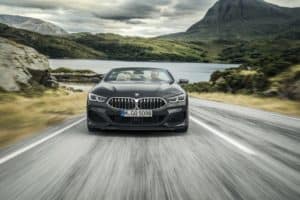 The luxurious side of the BMW 8 Serie’s character is shown with the help of a wide array of distinctive optional extras. Newly designed climate seats for driver and front passenger are available as an upgrade to the standard heated seats. For the first time, the cooled air is drawn in from the interior then guided along the body to the seats’ built-in fans for particularly effective temperature control of the seat cushions and backrests.

The standard ambient light feature emphasizes the forward-pointing lines inside the car to striking effect. Indirect illumination of the contour lines running along the center console and the door shoulders using precisely positioned LED optical fibers creates an exclusive mood. The color of the light can be changed via the iDrive menu. In addition to this, the Dynamic interior light function emits pulsating light signals in specific situations. These signals appear on the inner panelling of an open door when the engine is running and on the instrument panel in response to an incoming phone call.

The standard Harman Kardon audio system comprises twelve speakers and a digital amplifier, while the pinnacle of the audio line-up is without doubt the optional Bowers & Wilkins Diamond Surround Sound System. The unrivalled Diamond loudspeaker technology, fully active 12- channel amplifier with an output of 1,375 watts, dynamic equalizing and 12 partly illuminated speakers combine together to deliver a beautifully precise and multifaceted acoustic experience whose pristine quality can be enjoyed in equal measure from all seats in the new BMW 8 Series Convertible. 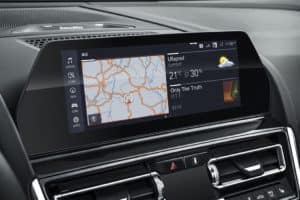 The eight-speed Steptronic Sport transmission’s controller is able to adapt the shift parameters to the current driving situation by means of intelligent networking with the standard Navigation system, enabling it to take the planned route into account. Navigation data is used to downshift early, for example, when approaching an intersection in order to use engine braking to slow the car down. Likewise, the intelligent controller is able to avoid unnecessary gear shifts between two corners that follow in quick succession, making it possible to drive through at a quicker pace.

Intelligent networking increases the efficiency of the drive system in the first-ever BMW 8 Series Convertible by allowing Auto Start Stop operation to adapt to suit the specific situation based on data supplied by the navigation system as well as by the cameras and radar sensors of the optional driver assistance systems. In this way, inefficient engine shutdown – for example when stopping briefly at junctions with yield signs – can be prevented. The movement of vehicles ahead is registered in order to determine the ideal moment for stopping and starting the engine.

Intelligent networking also boosts the efficiency-enhancing effect of the coasting function. When travelling at speeds between 9 – 99 mph, it ensures that the powertrain is decoupled as soon as the driver lifts off the accelerator. The vehicle can then simply coast along at idling speed and with minimized fuel consumption. This function is available with the Driving Experience Control switch set to ECO Pro mode. The switch to this “sail” mode only takes place in driving situations in which it appears worthwhile and which doesn’t compromise comfort or performance. If the accelerator is released very suddenly for instance, the powertrain stays connected in order to use the engine’s drag torque to decelerate.