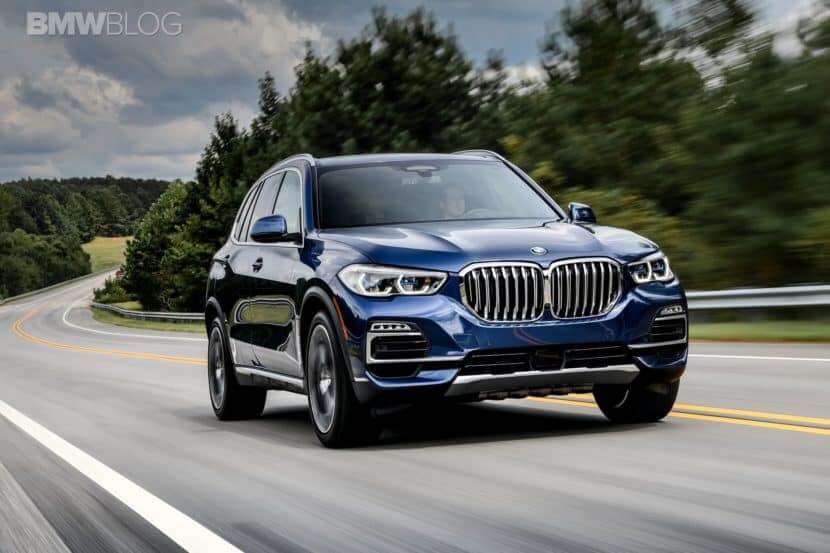 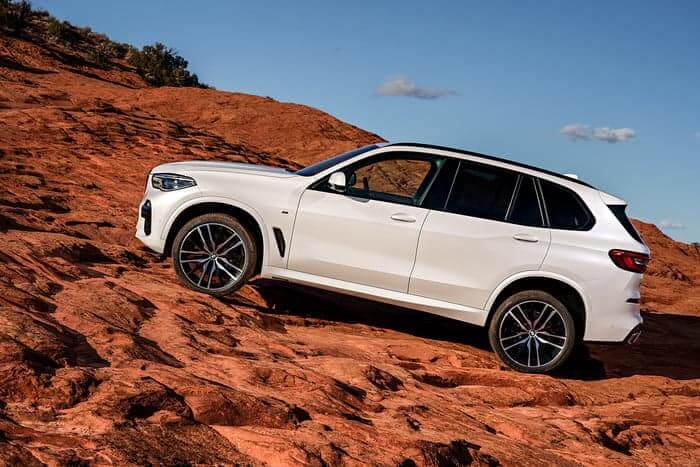 A key concern when developing the design of a new model generation is that while the changes should be striking and immediately obvious, the model should remain instantly recognizable. The new BMW X5 is a prime example of how to do it. The new BMW X5 has grown in all dimensions compared to its predecessor while retaining its character and proportions. Its design language has become more athletic, with more clearly defined surfaces and even more precise lines. As usual, the sculpted bonnet has a muscular appearance, and the front overhang is even shorter than in the predecessor. A key part of the front design is the large kidney grille, framed by a single surround. The standard LED headlights are very slim and wrap around into the front wings. 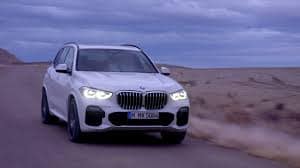 The new BMW X5 is also available with BMW laser headlights (range 500 meters). These are identifiable by blue, x-shaped elements in the headlamp units. The new, three-dimensional wrap-around LED taillights are a defining characteristic of the rear. Large, rectangular tailpipes provide a visual cue to the power delivered by all the engines in the new BMW X5. For the first time, even 22-inch alloys are available. 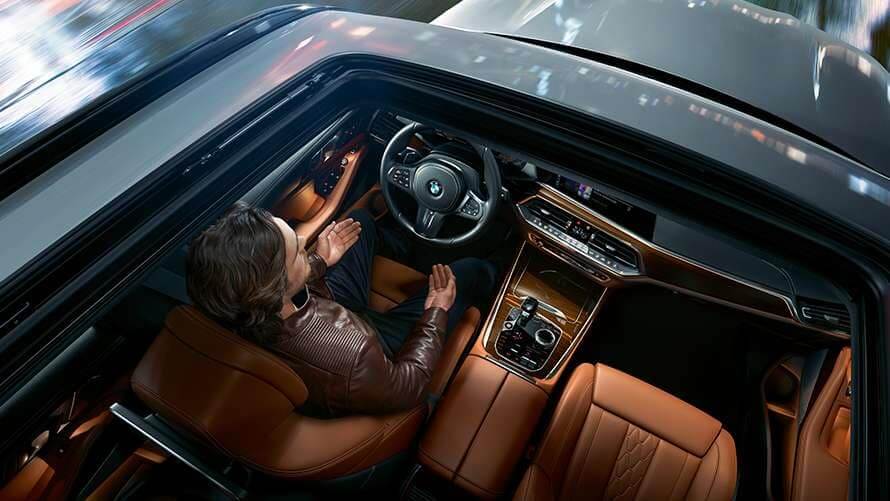 Anyone who’s ever driven a BMW X5 will feel instantly at home in the cockpit of the new
BMW X5 – even though much has changed. It’s the driver-oriented cockpit design, excellent all-around visibility and typical BMW interior flair that once again makes the new BMW luxury SAV unique in this segment.

The optimized multimodal interaction between driver and vehicle.

The new BMW Operating System 7.0 further optimizes the multimodal interaction between driver and vehicle. Customers can choose different input methods for various functions – iDrive Controller, touchscreen, the intelligent voice assistant included as standard, gesture control – with displays adapted according to the type of input. Voice control (with natural language processing) has been further improved, and gesture control now supports two additional gestures, for a total of seven. For the first time, Connected packages are available for the Live Cockpit Professional that make subscribing to other helpful services particularly easy, as an alternative to subscribing to services in the Store.

Drivers and passengers will really enjoy spending time in the new BMW X5. The materials convey a premium look and feel. The size of the interior has increased, and the horizontally layered dashboard design further emphasizes the interior’s width. The center console now houses the Start/Stop button as well as the new gear selector and further controls for the optional air suspension and various off-road modes. A striking feature of the new BMW X5 is the special finish with many premium electroplated elements and comprehensive standard equipment such as electrically adjustable and heated sport leather seats, the ambient lighting with Welcome Carpet in the door areas, combinable with a great variety of lighting schemes (Welcome, Goodbye, Door Open or Incoming Call). 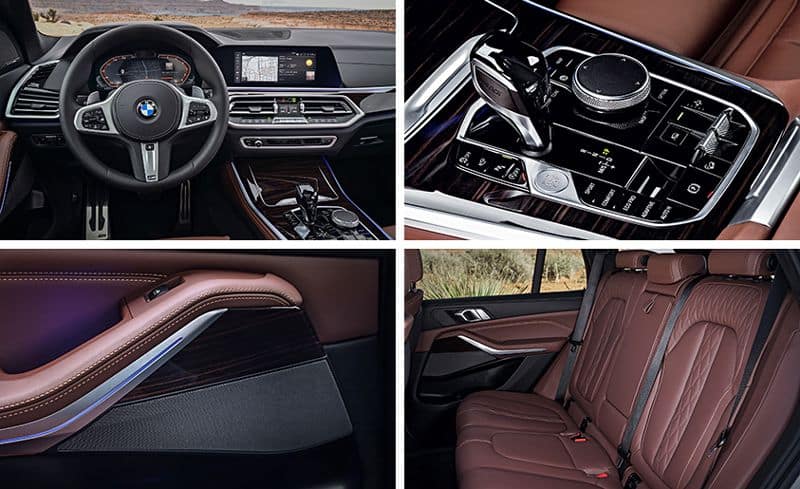 Exclusive flair with many luxurious options.

A plethora of options creates a particular sense of luxury on board, adding comfort along
with some quite exceptional features. These include four-zone air conditioning, the Ambient Air package with interior fragrancing, the Bowers & Wilkins Diamond Surround Sound System with 20 loudspeakers, and the thermal cup holder in the front center console that can keep beverages either hot or chilled. The optional Panorama glass roof makes for a brighter interior, with its transparent area now increased by 30 percent. The Sky Lounge version of the Panorama glass roof uses LEDs at night to create the appearance of a starry sky. Sophisticated glass trim on the gear selector, Touch Controller, Start/Stop button and volume control complete the exclusive range of options. From 12/18, the BMW X5 will be optionally available as a seven-seater again, and with electric fore/aft adjustment of the rear seats. A new feature (also from 12/18) is that the cargo cover can be electrically retracted into the luggage compartment floor, and with the optional Comfort Access, both parts of the two-piece tailgate can now be opened and closed electrically at the touch of a button. Luggage capacity is 650 to 1,870 liters, and the rear backrest has a 40/20/40-split folding function. 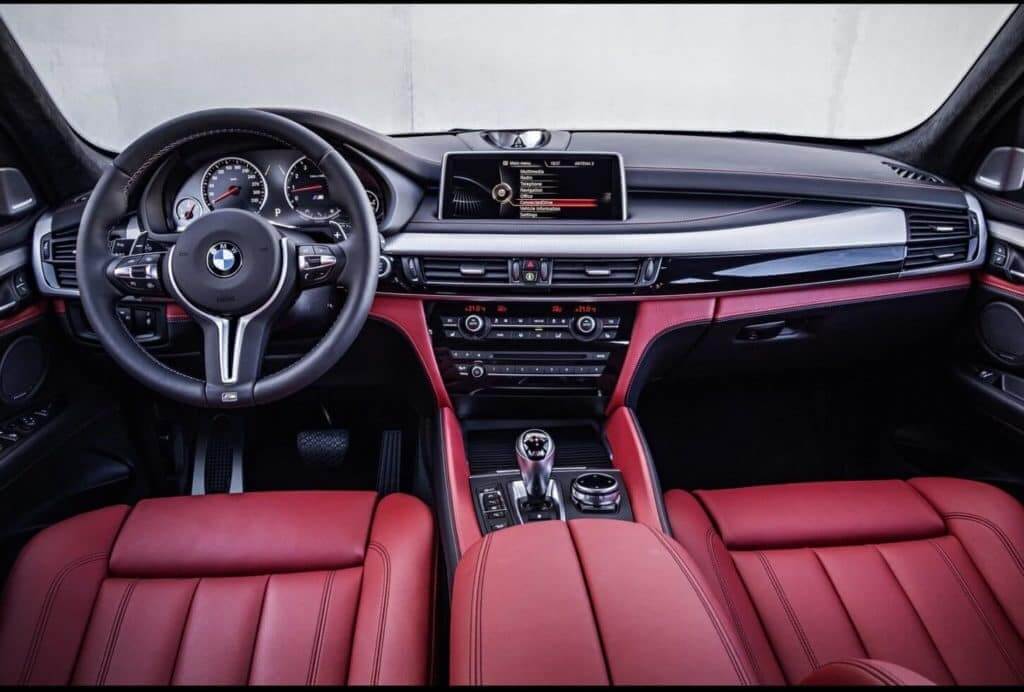 In addition to the new equipment items and suspension technology, the new BMW X5 also comes with an expanded range of driver assistance systems, taking the car further in the direction of automated driving. At BMW, these technologies fall under the umbrella term BMW Personal CoPilot. Standard equipment for the BMW X5 includes a cruise control system with braking function as well as Lane Departure Warning with lane return and Frontal Collision Warning with braking intervention, which now also responds to cyclists.

– The new Reversing Assist
provides a currently unmatched form of support when maneuvering out of a parking spot and operating in tight spaces: the system keeps a record of the last 50 meters of the drive to the parking space and, if required, will assist drivers having to exit by the same route in reverse gear by taking over the steering (with the driver braking and accelerating). Ideal for narrow driveways, for instance, where turning is not possible. The system even saves the steering movements from the drive to the parking space for a longer period of time, e.g. several days.

– Traffic Jam Assist
considerably relieves the driver in motorway stop-and-go traffic:
drivers can now permanently take their hands off the steering wheel at speeds of up to 60 km/h. However, they still need to monitor traffic attentively (no other activities are permitted). Another step on the way to the highly autonomous driving of the future, this feature is available in some markets, with the system providing support within its limits.

– The Priority Warning
system is part of the intersection Assistant and emits visual and acoustic warnings when it anticipates the driver disregarding priority rules, including red lights (from 3/19). When activated, the Emergency Stop Assistant brings the vehicle to a standstill – even across multiple lanes (in conjunction with the Lane Change Assistant) – should the driver suffer a health emergency. At the same time, it activates the hazard warning.